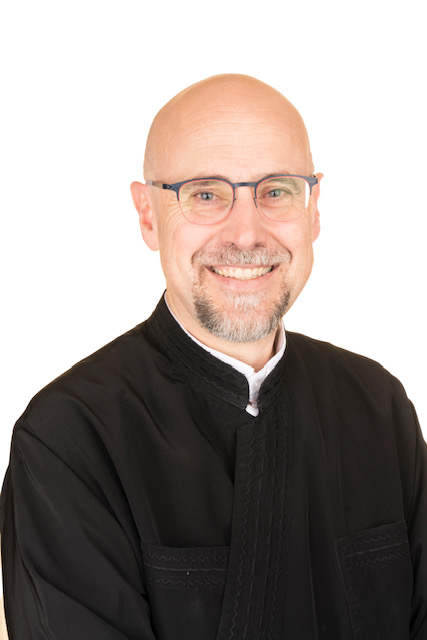 Fr. Christos was born in Athens, Greece in 1968. He is the eldest of three children. His parents, brother and sister reside in Athens, Greece. He is married to Presvytera Lisa (Parthenakis) of Cincinnati, Ohio. Father and Presvytera have four children, Basil, Nicholas, Jonah and Maria Angelica.

Fr. Christos has published articles in various Greek and English journals and has presented papers at seminars and conferences. His Masters of Theology thesis, “A Woman Christian Sage of the Fourth Century: Macrina the Virgin Philosopher”, was published in 1995. His areas of interest include the study of the Early Church, Eastern Orthodox Church and the modern Ecumenical Dialogue. He is currently adjunct professor at Canisius College, Buffalo, where he teaches a course on the history and theology of the Eastern Orthodox Church.

Fr. Christos is the Orthodox secretary of the International Commission of the Anglican-Orthodox Theological Dialogue since 1994; from 1994-2007 under the chairmanship of Metropolitan John (Zezioulas) of Pergamon and from 2007 under the chairmanship of Metropolitan Kallistos (Ware) of Diokleia. He has a great interest in the modern theological dialogue between the Christian churches and has participated in numerous Ecumenical meetings and conferences.

In June 1998 Fr. Christos was one of the three-member delegation of the Ecumenical Patriarchate to the Vatican and the late Pope John - Paul II for the patronal feast (Sts. Peter and Paul) of the Church of Rome.

Fr. Christos’ office hours are Tuesday through Friday from 9:00 am to 4:00 pm. However, during these hours Fr. Christos is frequently out of the office performing visitations and other pastoral ministries. Therefore, it is best to schedule an appointment if you wish to meet with him.